Search engine optimization drives the foundation of your site’s traffic, and site speed drives your rankings in the search engine results (all other things being equal).

It’s incredibly important for your rankings as well as your conversion optimization rate. According to the Think With Google site speed benchmark report, visitors are 90% more likely to abandon your site if your page load speed reaches 5 seconds.

That’s a big deal—and also why I wrote this case study.

Achieving a great speed is possible, especially for small and medium business websites. In fact, it might even have an advantage over corporate enterprise sites, since those tend to be weighed down by dozens of plugins and top-heavy tracking codes.

Want to see how I got my own WordPress site down to a 1-second load time even with Divi, a top-heavy visual builder?

Then let’s get to it!

Where Site Speed and Rankings Start

I tested out my site speed right after moving my site from Squarespace to WordPress, rebuilding it from the ground up on Divi.

I’ve walked into client projects where websites took over 12 seconds to load, so I wasn’t panicking… but there was definitely room for improvement.

You’ll encounter this kind of hurdle with your site too. Here’s how I analyzed it.

I used a few different site speed tools (GTmetrix and Pingdom site speed tests)  and they both reported consistent numbers: 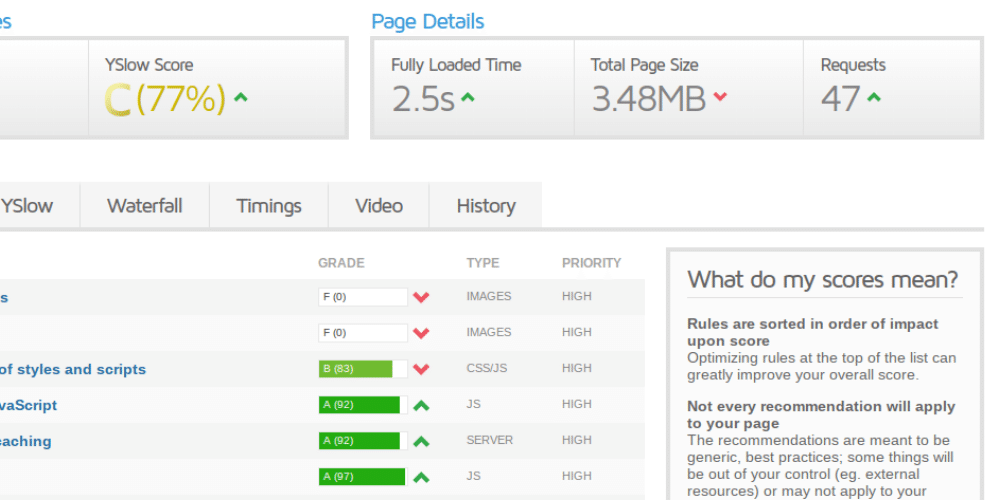 The site is already running on Divi, which uses a lot of shortcodes to get customizable designs in lieu of lean, purpose-built code. That means it’s a bit slower off the bat in exchange for extensive design control.

That was a conscious decision for the website. Divi’s shortcodes bring some anticipated extra page loading time, but that can be whittled down to a much more respectable number.

What the Waterfall Report Says

That lets us dig into which parts of the website are causing the issues.

And—overall—things are looking pretty good, according to that report. But there are a few images in particular that need optimizing:

The testimonial image was a known entity to me; I was afraid of over-optimizing it (which would result in extreme pixelation) and was keeping an eye on it. But the three blog images came as a surprise. 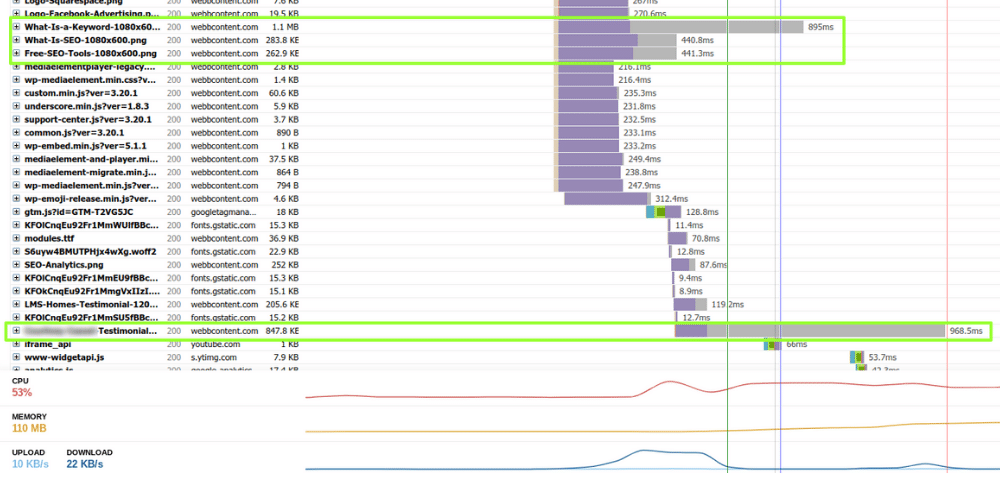 It turns out that even though the feature images appeared as thumbnails on the homepage as previews for my three latest blog posts, the site loaded them at full size before shrinking them down again.

This caused a tangible choke point in the site’s ability to load, which is why I tackled it first.

Optimizing images is one of the most obvious factors on site speed as it pertains to SEO ranking factors, but sometimes a few unoptimized ones can sneak past your attention.

I once witnessed an agency create a page with an 11MB image. Oof.

After optimizing just the 3 thumbnails on the homepage, the total size of the page dropped from 3.4MB to 2.1MB. A full third of the page no longer had to be loaded, boosting the site’s speed by that much—from a range of 2.5 or 3 seconds to the range of 1.2 to 1.8 seconds.

Even the Google site speed test gave the homepage a score of 97%. Now that’s what I’m talking about. 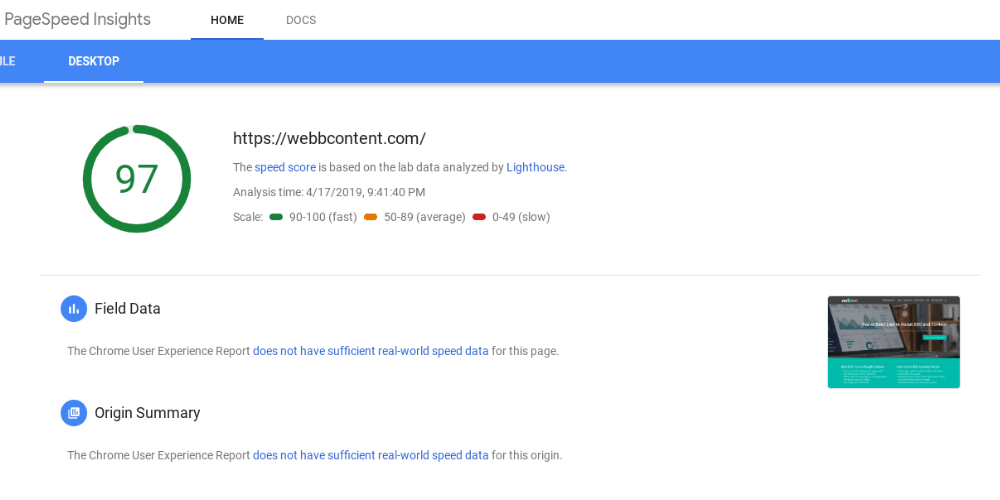 But the testimonial image also needed optimizing. It wasn’t a high-quality image in the first place, so I had to be careful about compressing it. Common go-to compression tools have been known to over-do it now and again.

So our options are to optimize the image appropriately, or to find a new one and optimize that one. Right now it clocks in at over 800KB all on its own, and it needs to be no more than 250KB—hopefully 200KB or fewer.

What happened when I optimized the giant testimonial image? It pushed site speed to sit between 1.1 and 1.5 seconds—a marginal but meaningful improvement, since it’s on the homepage.

We need to take a moment to talk about performance-enhancing plugins for WordPress.

Anyway, there are a few core things that most speed tests will tell you to do:

We’ve covered the last one on that list, but the other three are a bit trickier. In fact, they usually require straight up developer work. I’m not a developer, and the odds are pretty good that you aren’t either.

There are plenty of plugins out there that can take you 80% of the way there. Plugins aren’t purpose-built for your website and might not operate at 100% performance when compared directly with purpose-built code, but they can definitely get the job done—and many of them are free.

But here’s the rub: plugins require site memory to run as well, even though these ones are supposed to help with site speed performance. It’s better to keep the plugins as low as possible so that people don’t need to load all of their data with the site (in general). That’s why it’s important to add WordPress plugins that help your site without adding too many, which would make it cumbersome.

That’s why it’s super important to test your site’s speed every time you activate one such plugin: you need to make sure the plugin’s own weight doesn’t cancel out the speed improvement it creates. 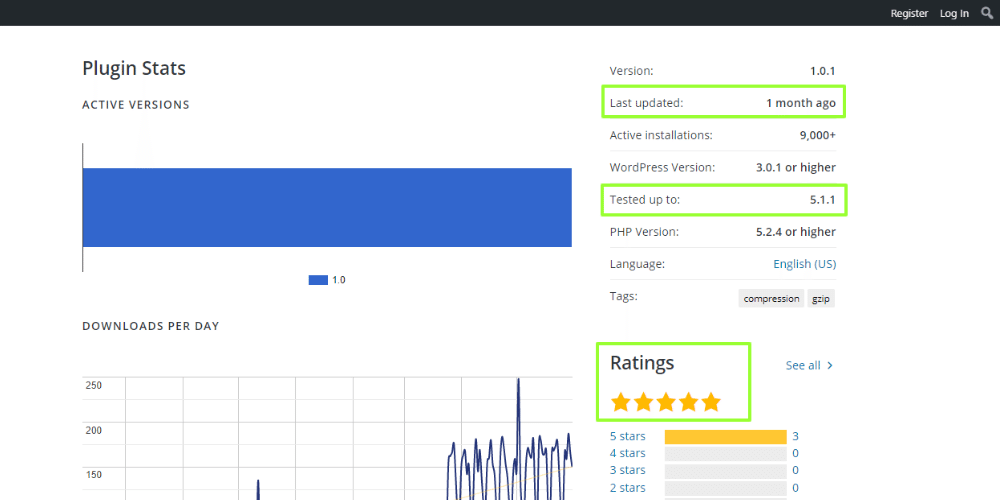 Try out these plugins. Many of them will make a marginal improvement to your site, which should create a noticeable effect in aggregate.

We need performance plugins to improve site speed, but we need to be careful about how many of them we install on the site—or else the sheer weight of them could cancel out the benefits.

So how do you strike the right balance?

Testing, in a word. Test your site speed before and after flipping the switch on each plugin, and test your speed with all of them active to make sure that they don’t conflict with each other.

Try not to install more than 15, but keep it to even fewer if you can.

How My Hosting Provider Solved Desktop Performance (Sort of)

Striking the right balance with performance plugins can be tricky. But there might be another way, depending on your provider. There was for me.

As it turns out, my hosting provider installs a single performance optimization plugin on its own with every WordPress setup. This is the SiteGround Optimizer plugin, and it only works with websites using the SiteGround hosting service.

This particular plugin accomplished most of what I needed, taking a look back at the list:

It covered all of those functions nominally, plus image optimization. While it didn’t perform every function quite as well as the other plugins, it was a clear winner. It deferred Javascript parsing and it minified code quite well. It did an adequate job of optimizing image files, but there was room for improvement there. It also did a decent job of Gzip compression

Since the SiteGround Optimizer’s performance was only so-so on Gzip compression, I tested out the site with that plugin running everything else, activating a specialty plugin for Gzip compression instead.

The results were good—it shaved an extra 0.3 seconds off the page load time. That was the sweet spot. 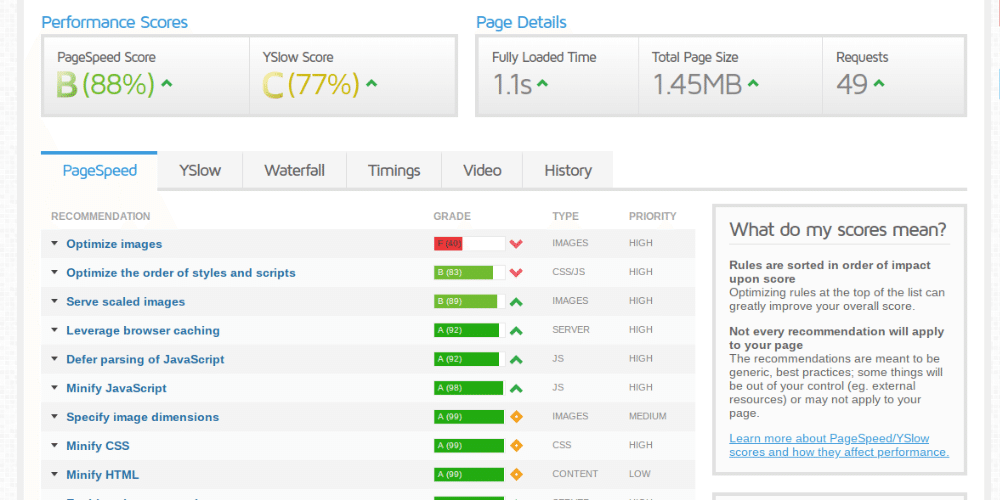 Instead of installing 5 or 6 performance plugins, I could make it work with just two. Even though the SiteGround Optimizer might not get 100% of the results in for each specific function, the trade-off of getting 75% of their efficiency without the weight of another 5 plugins was better for the site’s overall speed.

The lesson learned? Plugins can nudge your site toward better speeds, but picking a good hosting provider will move it by a mile.

Site speed is an integral part of SEO, and every part of your website factors into that end result. The key points you should take away to improve your own website are:

Stick to those lessons and you’ll be well on your way to speeding up your website in no time!

Having said all that, I did leave out a few things: mobile speed and content delivery networks. I’ve explained why in the two sections below.

I hope this has been a useful read. It’s not a comprehensive textbook, but I hope it shows you how to approach site speed improvement with practicality in mind, especially if you’re not a software developer or a particularly technical marketer.

FAQ #1: Why Aren’t You Looking at the Mobile Site?

Great question. Unfortunately the tools at my disposal don’t test mobile connections very well. In reality, my mobile site takes about 1.5-1.7 seconds to load, but tests like GTmetrix, Think With Google, and Pingdom don’t reflect that reality.

In combination, those factors create misleading numbers. I spent hours making optimizations to my mobile site—cutting it down to less than 1MB of memory—before realizing it.

FAQ #2: Why Aren’t You Looking at Content Delivery Networks?

I’m not going to implement GTmetrix’s suggestion to implement a content delivery network because they serve content from a different IP address than your actual server.

On free CDN services like Cloudflare’s entry plan, the IP address changes frequently—perhaps even more than once per day. That’s a substantial “spam signal” in Google’s eyes, and it could absolutely destroy your hard-won rankings as a result.

Paid subscriptions should give you a dedicated IP address, but your site could still drop significantly—even dramatically—for several weeks or months while search engines begin to trust those new IP addresses the content delivery network. Heaven forbid the IP addresses change again any time soon after that, either.

So we’ll stay away from that for now, thank you very much.

I hope you feel more confident approaching website improvements after reading this case study. Every website will present different challenges, but feel free to return to this page to get some ideas on where to look next.

Ready to Learn More? Read These Next: 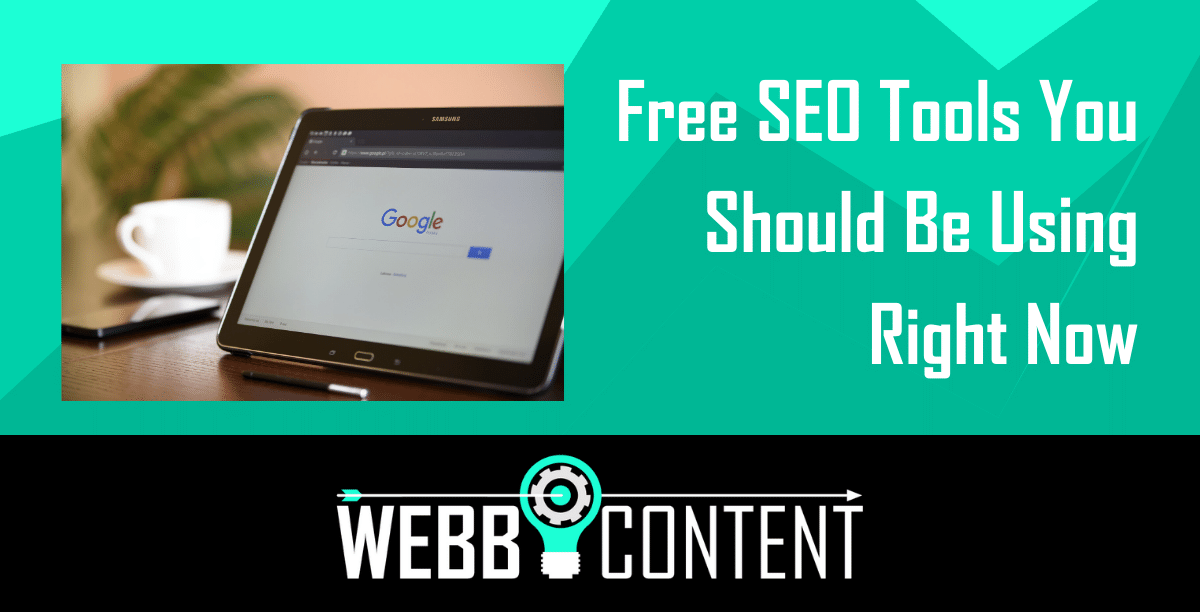 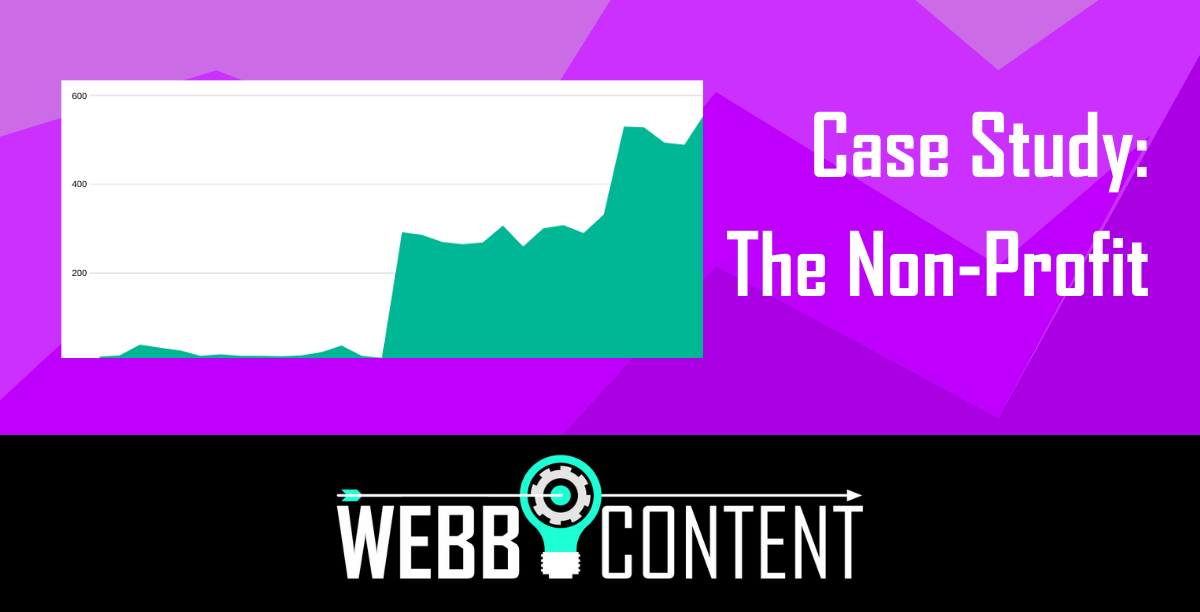 Andrew is the SEO and content marketing consultant at Webb Content. He worked in several agencies full-time and alongside another 7 as a freelancer, then went in-house to give Ontario's insurance industry a kick in the pants. Now he works with small and medium businesses to build consistent, long-term traffic. He still writes content in his free time, too. It's kind of an addiction. 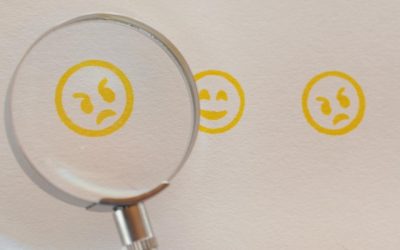 How to Remove a Bad Google Review

Bad Google reviews hit you in the gut when they show up in your inbox. It feels like a slap in the face, especially if you’ve made such an effort to run your business in a positive way. Reviews are some of your most important content—it’s a big deal. You know you did...

END_OF_DOCUMENT_TOKEN_TO_BE_REPLACED 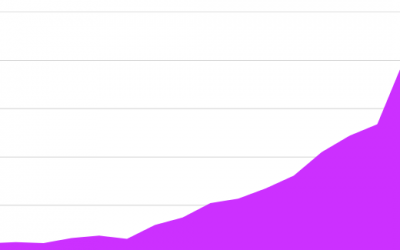 How Long Does SEO Take to Generate Results?

Search engine optimization underpins almost every digital marketing strategy in play today, but many business owners find it elusive because it often takes time to see results. In fact, you won’t even see the needle begin to move on traffic for 5-6 months in most...

END_OF_DOCUMENT_TOKEN_TO_BE_REPLACED 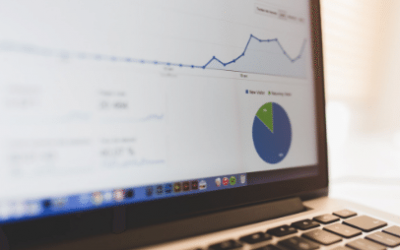 How to Set Up Google Analytics Like an Agency Professional

Seeing weird traffic patterns? Think you might be counting your own office traffic in analytics reports? You’re not the only one, and there are straightforward fixes for all of those problems. Google Analytics is the greatest gift to digital marketing since Tim...

END_OF_DOCUMENT_TOKEN_TO_BE_REPLACED 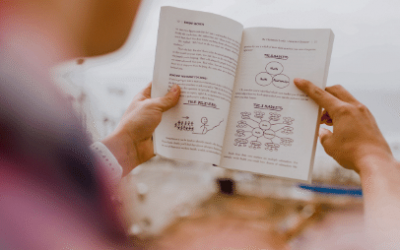 You’ve read enough half-baked blogs from talking heads going on about content marketing challenges to know the basics: “Post content regularly” “Make truly excellent content” “Be sure to post it on social media” What eye-rollers. If only the rest of us had thought of...

END_OF_DOCUMENT_TOKEN_TO_BE_REPLACED

Andrew is the SEO and content marketing consultant at Webb Content. He worked in several agencies full-time and alongside another 7 as a freelancer, then went in-house to give Ontario's insurance industry a kick in the pants. Now he works with small and medium businesses to build consistent, long-term traffic. He still writes content in his free time, too. It's kind of an addiction.