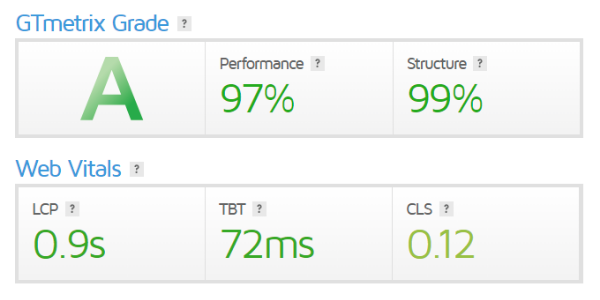 How to Fix Cumulative Layout Shift and Other Core Web Vitals for Divi 4.0 and Higher

Google’s introduction of Core Web Vitals as a ranking signal has put a significant strain on  Divi website creators who rely on organic search traffic from Google. Cumulative layout shift has had a lot of those users stumped, and I was one of them.

I found a way to reduce my website’s cumulative layout shift (CLS), reduce total time blocked (TBT), and how to maintain a low score for longest contentful paint (LCP).

Update: While I haven’t solved the Divi menu’s last 0.11 CLS, I have found a way to use critical CSS to help reduce CLS even further if the first three steps didn’t help you. You can read it in Step 4!

Follow these 4 steps to put yourself in good standing, too.

When learning Divi, I was taught to make a desktop version of a page and a separate mobile version inside the visual builder, setting them only to be visible on the appropriate devices.

The problem? This caused a massive cumulative layout shift. On one website, it raised the CLS score to 1.1 in GTmetrix… and Google wants to see 0.1 or lower. 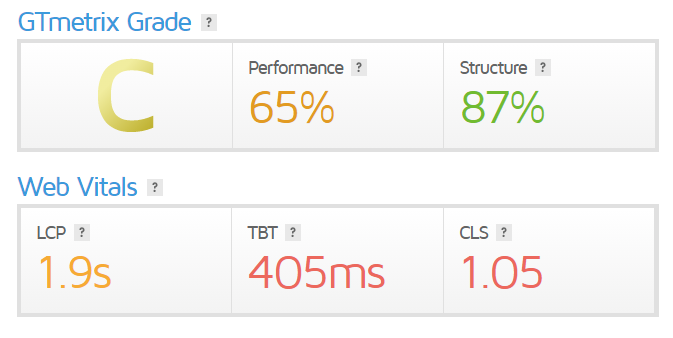 Pro tip: Creating two versions of the same page is also pretty bad for page speed because it forces users’ devices to load both before deciding which one to hide. Creating a single mobile-responsive layout should be a best practice for optimizing all of your core web vital metrics using Divi, not just cumulative layout shift.

I tested out the same page in GTmetrix without the separate mobile version of the page, and—lo and behold—the CLS score dropped to 0.3. It’s still higher than the recommended target set by Google’s Core Web Vital guidelines, but this lowered the score by more than two thirds.

After working on the desktop layout to become responsive for tablet and mobile devices, the CLS score only rose a fraction from 0.3 to 0.34. Clearly it was a huge success. 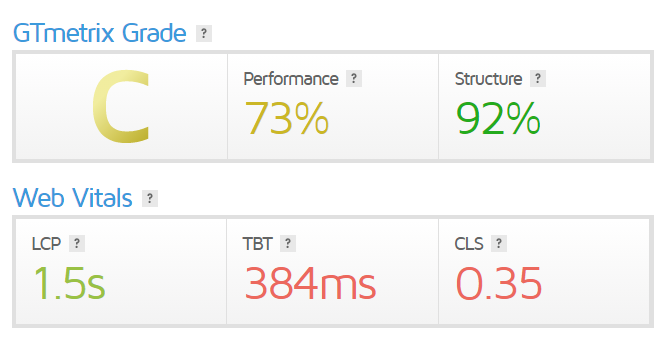 Now, this sounds easy, but it could take some time if you need to implement this for your top level pages. Divi provides tons of customization options buried in the visual builder’s menus, and you’ll need to fiddle with those on a pretty deep level to get the same content to work on all three kinds of device screens (desktop, tablet, and mobile).

If you’re working with web designs contain overlapping sections or off-set modules, then I have some tips that helped me to reduce my layout shift: 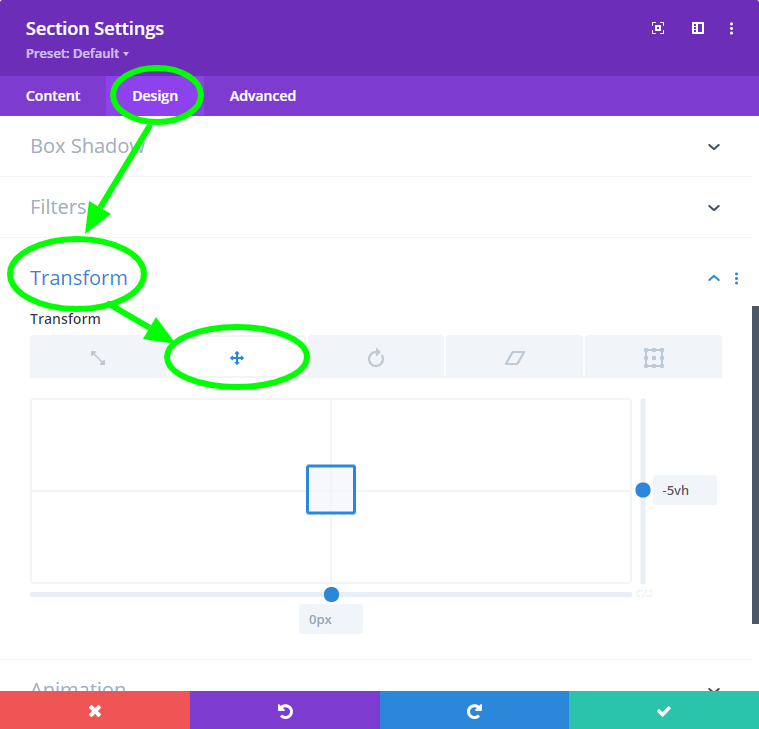 Step 2: Avoid Divi’s Headers in the Theme Builder (For Now)

On another website of mine, the blog template I used through Divi’s Theme Builder (introduced in the 4.0 release) was experiencing layout shifts. I was surprised to discover this, since had my blog template set up to be as basic as possible: 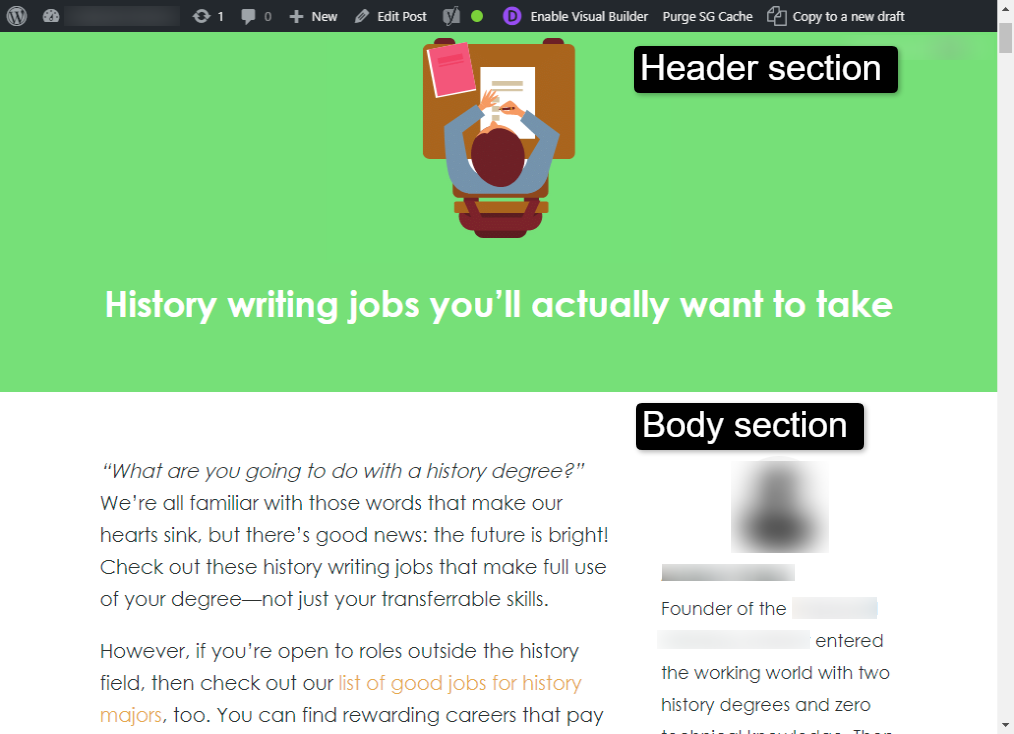 This left me scratching my head, but I wondered if the header had anything to do with it. After saving my header section to the module library (please don’t skip this), I removed it from the theme builder’s Header section for the blog and added it to the Body section instead.

The result? My CLS score dropped from 0.3 to 0.2 on subsequent GTmetrix tests. 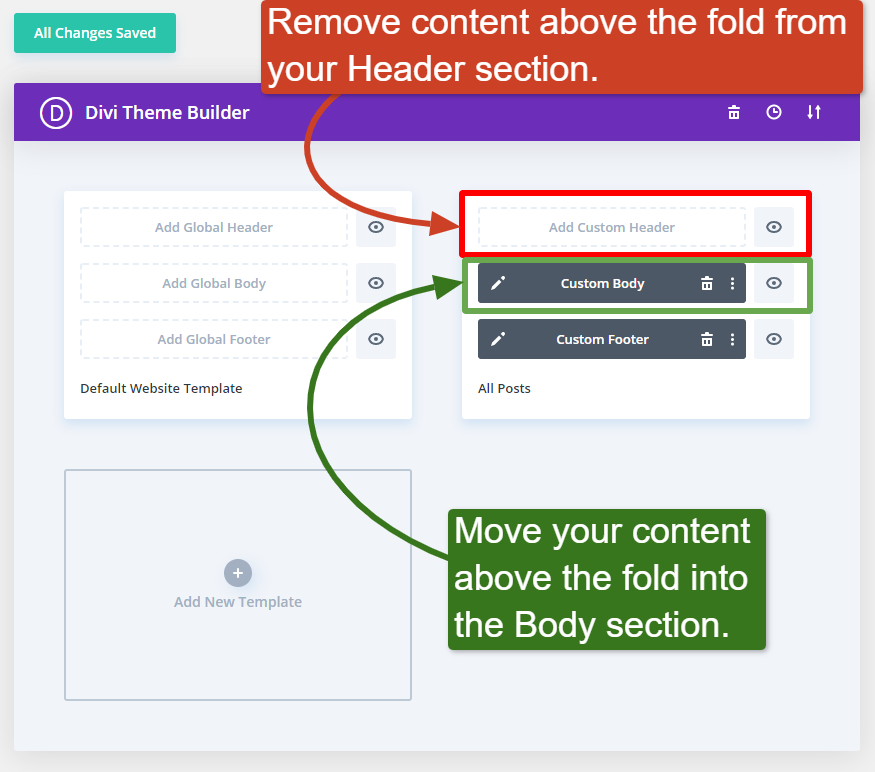 Pro tip: Previously, I had a full-width menu module in the header along with my hero image and dynamic H1 text above the fold. I removed the full-width menu module entirely, but it took Divi a few minutes to realize this and repopulate the default menu. Don’t panic if this happens to you—I was staring at a blank white space above my menu for 5-10 minutes, but hiding the Header component in the theme builder increased the Total Blocked Time by 150-250 milliseconds. Just give it a bit of time to put the menu in the proper place.

Future Divi releases might solve the CLS problem of loading visual content in the header (the team at Elegant Themes adds new features and performance upgrades all the time), but this should help to reduce your cumulative layout shift score until then.

Every time I tested a Divi web page in GTmetrix I noticed that images were causing layout shifts by loading last (on every page of every website I managed).

This was driving me nuts because I had tried every conceivable way to set specific image heights and widths within the Divi settings, and nothing worked.

Recently (December 12th, 2020) I noticed that SiteGround had updated its performance plugin to expand Lazy Loading settings. Instead of just toggling Lazy Loading for everything, now it had options to include or exclude specific kinds of images and video files.

A quick intro to lazy loading if you need it: “lazy loading” is a tactic that most performance-savvy website creators use to reduce the time needed for a web page to load on a given device, like a laptop or a mobile phone. It’s supposed to work by delaying the loading of images and video content below the fold until the user scrolls down to them, at which point it loads on the spot. This has allowed websites using visual media (i.e. all of them) to load pages faster in the eyes of users and Google alike. 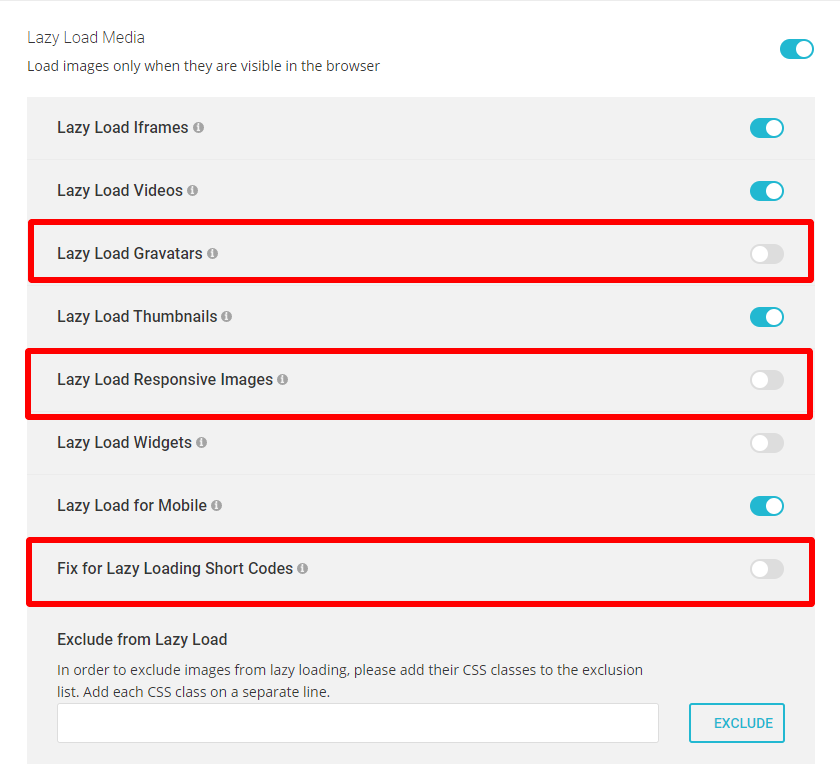 Two particular settings helped to reduce my cumulative layout shift from 0.2 to 0.12:

That reduced my remaining CLS score by nearly half. 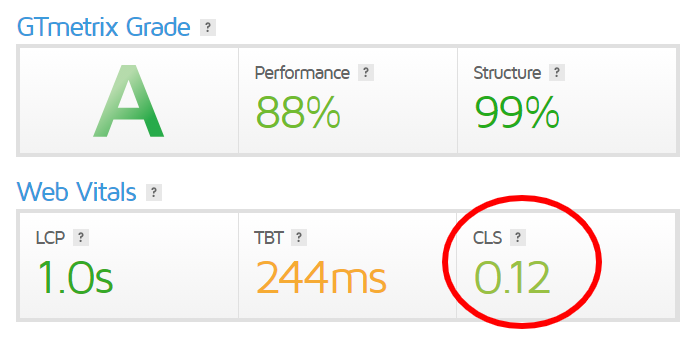 That’s the kind of improvement we’re all looking for.

Pro tip: While disabling “Lazy Load Responsive Images” didn’t lower my CLS score any further, TBT is also relevant to SEO. It was introduced as one of the three Core Web Vitals you’ll see in Search Console (along with Cumulative Layout Shift and Largest Contentful Paint). Try to lower it wherever possible.

You might not use SiteGround for your host, of course, but you can use alternate performance plugins for WordPress. Take a look at Jetpack or Autoptimize to see if you can get the same level of control with your lazy loading settings. If those still don’t work out, then it might be worth switching to SiteGround.

I ran into even more core web vital problems for Divi on another website that I manage, but I managed to get all of them into the green. even with a more complicated website than the one I’ve detailed above. 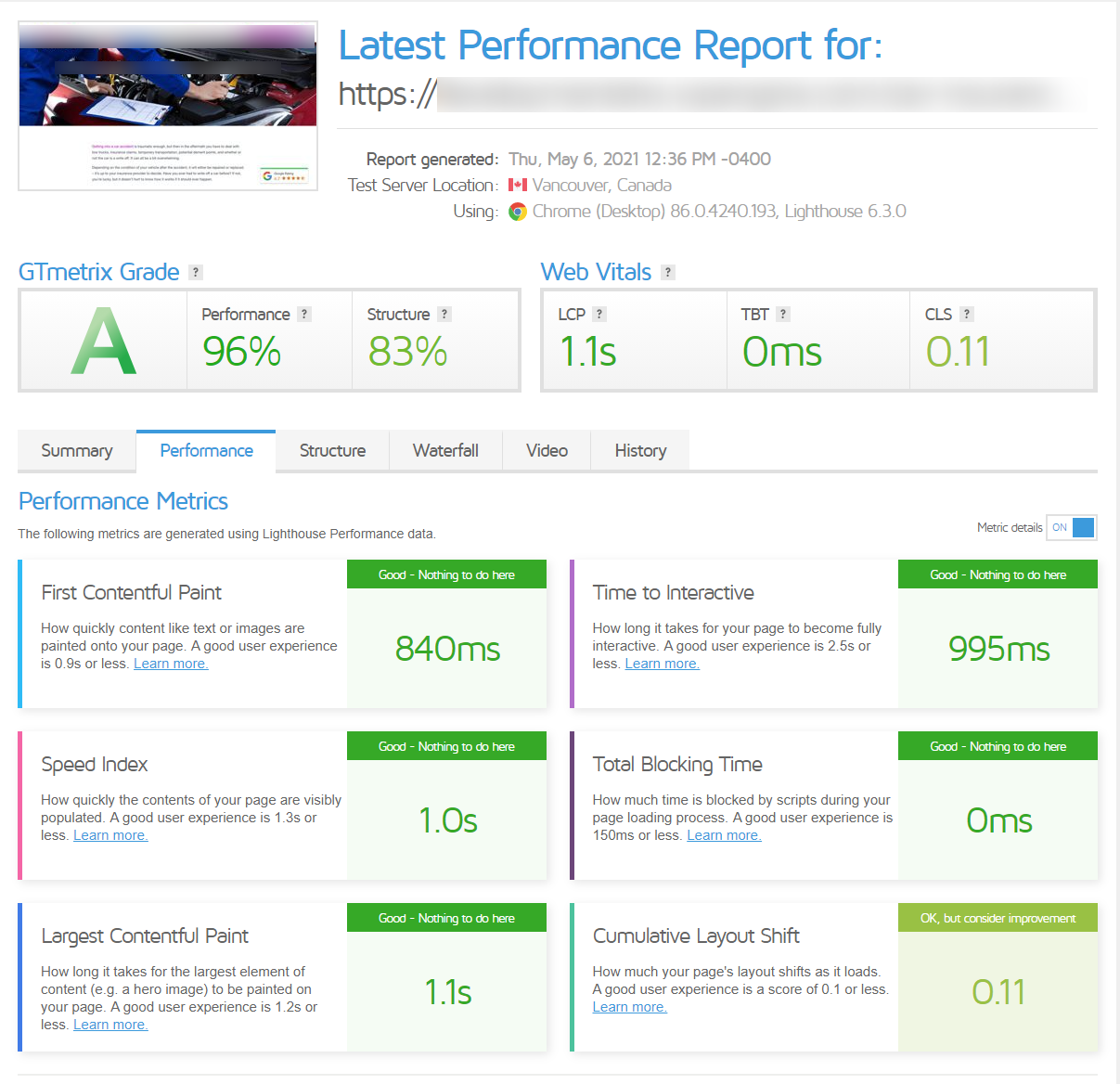 This came down to two core actions:

At first the website had a 0.4 CLS score, which was 0.3 higher than what Google wants to see.

The first thing I did was deactivate excessive performance plugins and features, as mentioned above. In this website’s case, the Autoptimize plugin was overlapping with two performance features within Divi. I cut down the Total Blocking Time (TBT) down to 84ms just by deactivating the plugin, but the CLS score was still 0.4, as you can see above.

Trying to see what happened when I deactivated everything, I turned of Divi’s two main performance settings in the options. 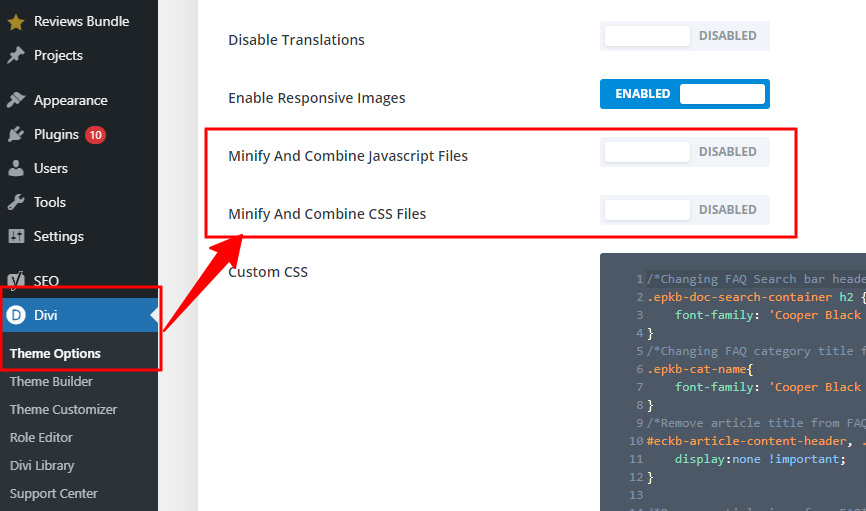 This reduced my TBT score to 0 and brought down my CLS score to 0.02, but it raised by LCP (Largest Content Paint) to 2.4 seconds. LCP is the time it takes to load the largest content element above the fold on your page (often images). As you can see, GTMetrix’s overall performance score plummeted because of that. Speed is still important!

That’s when I could see exactly how much time was saved by the performance-enhancing settings—they cut my Largest Content Paint time in half, by 1.2 seconds. Good to know, right?

Depending on your setup, you may wish to turn on your settings again. However, I’d urge you to keep them off for the next step. The plugin I used to generate Critical CSS also carries out a wide range of performance enhancements for WordPress, and it can create conflicts with hosting providers, themes, and other plugins somewhat easily.

The way Divi is built can cause massive layout shifts (which you’re probably painfully aware of right now), and this is the best explanation I’ve read on the subject:

“Out of the box, styling of Divi elements can be achieved in one of three ways, each coming into play further down the DOM. They are:

This means that Divi loads the default content, unstyled, and then applies styling afterward. Even though I had spent countless hours setting maximum widths on various modules, it didn’t help my CLS score because all of that styling data was stored inline—the third source for CSS that Divi uses, not the first or second.

This is where critical CSS comes in. It loads everything on your page above the fold, including styling from your cascading style sheet (CSS). You can find various services and plugins that perform this, but the Swift Performance Lite plugin provides this feature free of charge. That’s why we’re using it.

Note: This plugin caused a conflict with my WordPress installation at first, but I found a way around it. I think it was an automatic GZIP feature that conflicted with the same feature from this website’s hosting provider, WP Engine. Neither WP Engine nor Swift Performance Lite had an option to turn off GZIP compression, unfortunately, but I got them to work together by disabling the Minify HTML option in SPL’s settings.

With that out of the way, follow these plugin settings before trying anything else: 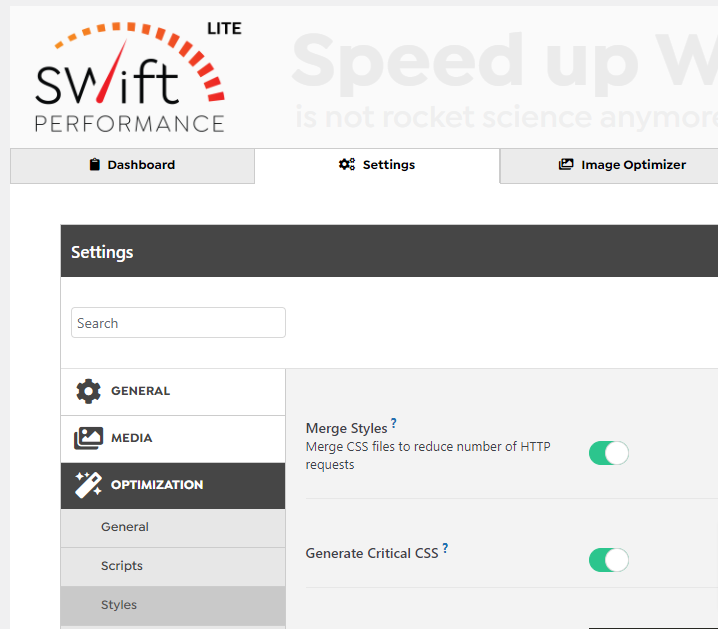 Having done all that, the Divi website achieved excellent speed and core web vitals.

The only thing I have yet to solve is the menu in Divi. It still contributes 0.11 to layout shift, but both of the websites detailed here have performance in good standing regardless. Your Divi website should be better off by following these steps as well. Just give yourself time to test out different settings on your WordPress installation.

Andrew is the SEO and content marketing consultant at Webb Content and the owner of Employed Historian. He worked in several agencies full-time and alongside another 7 as a freelancer, then went in-house to give the insurance industry a kick in the pants. Now he works with small and medium businesses to build consistent, long-term traffic. He still writes content in his free time, too. It's kind of an addiction.