How to Make Squarespace SEO Work for You

Squarespace is basically the Apple of website products: everything is presented in a neat, tidy, and easy-to-use package.

But, like Apple products, Squarespace’s ease of use also makes it difficult to customize to your exact specifications. I’ve used it myself for several years and can tell you that it’s a little bit difficult to get Squarespace SEO just right compared to WordPress sites.

These pointers go out to you.

It’s accessible under Marketing > SEO, but it’s not super helpful.

You can see a few things:

The advanced SEO settings just let you alter the format of titles for the top-level domain, pages, and posts. Most SEOs prefer to set custom titles on a page-by-page basis to optimize them better, but this may be useful if you don’t have time to do that immediately.

This isn’t really a surprise. Squarespace’s philosophy is all about simplicity, and it’s trying to grow into a complete marketing platform. That’s why it’s developed basic suites for analytics and email marketing in the last few years.

The Benefits of Squarespace SEO

Making a Squarespace website means putting a lot of your SEO on autopilot. That’s not ideal for specialists (like yours truly), but it does come with some benefits if you’re a small team and looking to build a commercial website quickly.

Here are the perks that come with it.

You Get an Automatic SSL Certificate

Squarespace upgraded all of its sites with a secure socket layer (SSL) certificate in 2016.

Frankly, this was a fantastic move.

It took the hassle out of getting a certificate for most webmasters out there, including myself at the time.  The feature has become less competitive now, since everyone can get a free SSL certificate from Let’s Encrypt.

Google has pushed accelerated mobile pages (AMP) for several years. The technology just boils down web pages to their essential elements in order to speed up loading times for the end users.

Squarespace has this feature built into its templates, which is handy. It is now, anyway. I didn’t notice performance changes for the 3 years I used the platform.

Still, AMP can be a game-changer for sites looking to build up their raw traffic. Google definitely favours them over most mobile pages because they’re so lean. A word of caution, though: AMP pages strip away most HTML and javascript code as well, which likely includes your lead generation mechanisms.

All the themes come ready to render on mobile screens, but this is absolutely part of the premium price tag you’re paying for Squarespace in the first place. So it’s good, but anything less would be an absurdity.

Most themes these days come with mobile responsive design as well, so it’s not an inherent advantage. Just another non-negotiable feature  any website.

There’s also a limited number of themes to choose from within Squarespace, so be sure to scope out the themes before committing to it.

The Drawbacks of Squarespace SEO

So it’s safe to say that Squarespace comes with some SEO-friendly features right out of the box, which is great for entrepreneurs and small teams that need to move quickly.

But there are some drawbacks to it as well that can impede a professional SEO strategy, ultimately limiting the pipeline of organic search traffic to your website.

Some of the Automatic Features Backfire

The “Automatic site map” is basically a throwaway feature here. Almost every WordPress site on the planet uses the Yoast SEO plugin, which does the same thing for free.

Same thing for the “search engine page descriptions.” That’s called a meta description, and the free Yoast plugin does a far, far better job of outlining how it works, why it’s needed, and where it will display (or not).

Site Speed Can Take a Hit

Squarespace’s websites have a reputation for loading slowly. It’s not necessarily any slower than a WordPress site, but certain themes can definitely win out in performance here.

That speed improved over time (I’m assuming there were product improvements made behind the scenes), but speed has never been great on Squarespace.

WordPress also isn’t optimized for speed out of the box, but you can customize it to make improvements that exceed Squarespace’s capabilities. You don’t get that ability with Squarespace.

All of this matters because site speed has a huge impact on your web traffic. The literature out there says that you can expect to lose 30% of your visitors for every 3 seconds your site takes to load. Google’s algorithm also penalizes sites for slow load times because it knows how much it affects the end user’s experience.

I built my the first version of this very site using Squarespace’s “Shift” theme. It looked clean, crisp, and spacious—everything I wanted in a theme at the time.

But this came at major expense for SEO.

The homepage itself was stitched together by a collection of URL fragments, which doesn’t do any favours to make your site crawlable. This isn’t inherently a a strike against your site’s SEO value, but it sure doesn’t make it easier for Google to crawl your site and learn what it’s about.

Pro Tip: URL fragments also make it difficult to use any kind of analytics platform other than Squarespace’s own if you want to get into advanced capabilities in the future, like progressive heatmapping or tracking custom goals on apps.

Styles Limit Your Headers and Typography

One of the biggest draws of Squarespace’s Apple-esque product philosophy is also one its biggest drawbacks.

And that would be the fact that Squarespace has preset designs for specific headers, and they’re not easily changed, if at all. So you’d better enjoy the typography and size of the text and headers in your theme, because you’re stuck with them.

This can create a tug-of-war between how you want your web pages to look to human eyes and crawler’s eyes. It’s not ideal for professional websites in it for the long run.

What Happened When I Switched to WordPress

In early 2019 I switched my website from Squarespace to WordPress, and I noticed some important differences upon setting it all up.

This is particularly nice because it takes up far more real estate in the search results for branded searches.

Part of that came from the extra control I had on directories and URL structure, but then that’s part of why I switched to WordPress.

So What’s the Verdict on Squarespace SEO?

Rand Fishkin of Moz—a highly respected voice in the industry—has gone on record saying that Squarespace is an SEO-friendly platform.

But Rand also went on to say that while Squarespace works well for SEO right out of the box, setting up WordPress properly can definitely exceed it.

Sites can still succeed with SEO in that scenario, but it’s going to be a lot harder to get the ball rolling without a proper on-page SEO setup. You can still create content and earn backlinks, of course, but you’ll need to work that much harder to make it all work.

But at the end of the day all of this needs to be weighed against your business goals and resources. If you don’t have the time or energy to build an optimized WordPress website methodically, then Squarespace can certainly prove fruitful. It served me well for several years.

But it’s not the best setup for websites that plan to make SEO an integral part of their digital marketing strategies. 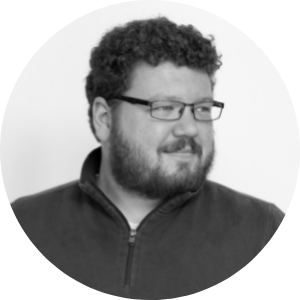 Andrew is the digital marketing consultant at Webb Content. He's worked in a few different agencies full-time and with another seven or eight as a consultant.

He's usually writing new content, creating the occasional website, and constantly finding new ways to optimize those sites. It's kind of an addiction.

Send us a few dates and times that work best for you and we'll set up a discovery call or meeting to see what will work for your business.